Are you someone who enjoys conflict? Do you like to stir it up on social media? In the watch world, certain topics are predictable in their ability to generate dissonance. Earlier this year it was Baselworld, for years it was the quartz crisis and in recent times, Rolex has been a centerpiece of controversy for a variety of reasons. Most of these topics have been chewed on to the point of tedium. They are the chyme in the watch world’s alimentary canal.

Less common, but even more controversial, is the topic of guns. Post a photo of a firearm along with your favorite wristwatch on a watch forum and you’ll see what I mean. Reactions will vary from “Sweet pistol!” and “Great combo!” to “What a manly man” and “Short barrel?” Some watch enthusiasts find the mere mention of firearms to be an affront to the pursuit of their happy hobby while others are delighted to find even more common ground with virtual “friends”.

I’ve been thinking about this topic lately and there are clearly points of intersection between these two pastimes. Let’s look at some of them.

The things you carry with you in this world, the essential items, gear and kit all come under the heading of everyday carry (EDC). EDC items will vary from person to person. For example, my wife says her EDC is her watch, phone, wallet, keys, sunglasses and handkerchief.

Are there other things in that purse? Most definitely, but she finds these particular items to be essential for her daily survival in the suburban jungle. For millions of people, handguns are part of their EDC along with flashlights, folding knives, multitools and so forth. For me, essential is defined by the following question: “If I forget and leave the house without it, what will I always go back home to retrieve?” Answer: “Wristwatch and handgun.” Again, that’s just me. 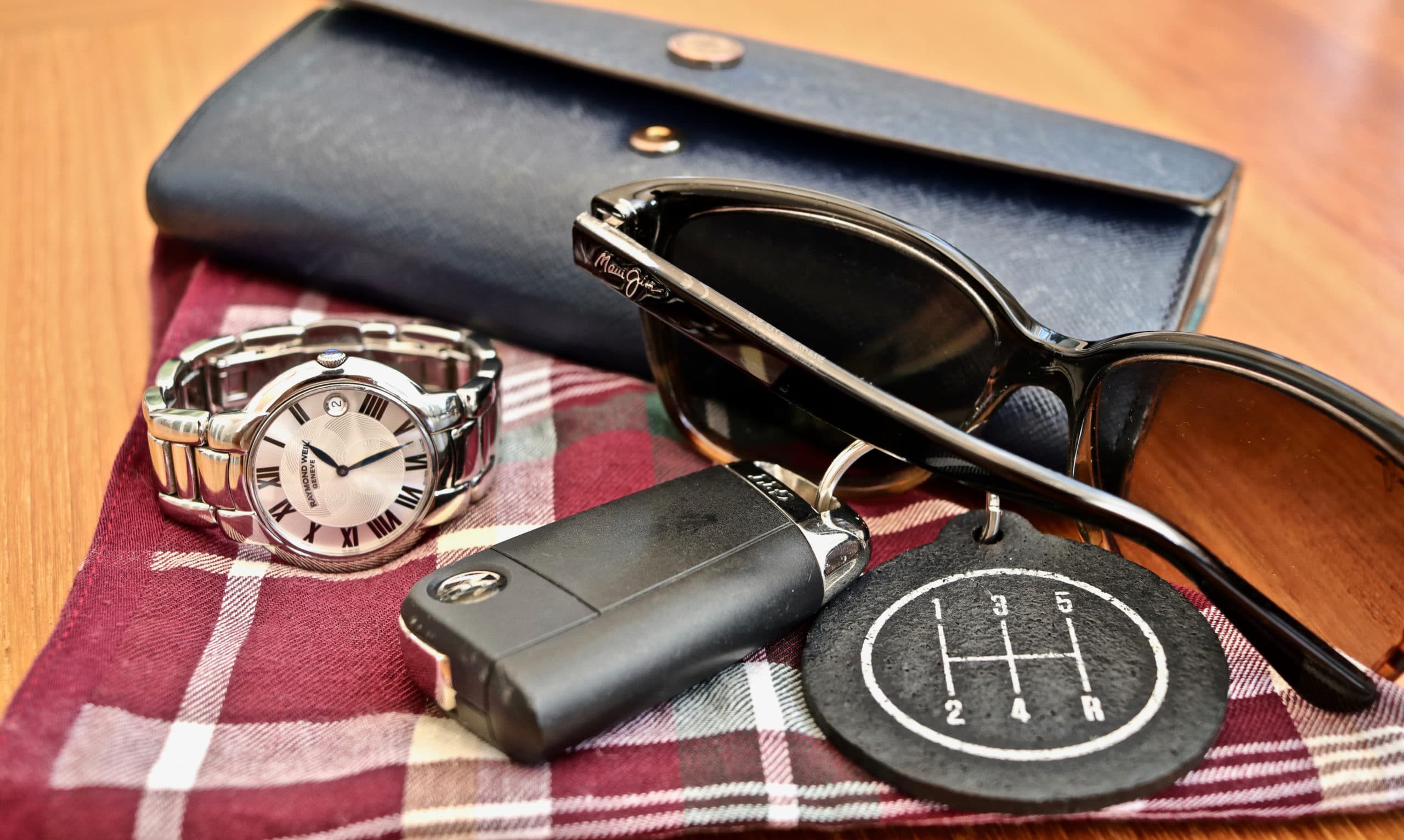 The “pocket dump” has become a common theme of wristwatch posts on social media. The term is pretty self-explanatory but it’s basically a shot of your watch along with certain items supposedly carried in your pockets, be it your wallet, pen, folding knife, etc (I say “supposedly” because, unless you are EMS, Police or Military, you probably aren’t carrying half the stuff that I see in these shots!).

When firearms are included in a pocket dump, it’s almost always a handgun. Like wristwatches, those handguns are often accessorized and full featured. Things like tritium sight illumination, special grips and holsters are common. What do watches, cars and guns have in common? That’s easy to explain. They are functional, personal, mechanical and often cleverly designed. They can also empty your wallet. Check out the Chatterbox section of car and gun forums and you will find folks (usually guys with some exceptions) who are just as passionate about watches as they are about cars and guns.

Oh sure, anybody can wear a watch, drive their car or shoot a gun. True enthusiasts go way beyond that…. they tinker, modify, lubricate, repair, collect and compete. They absorb data and specifications. They fantasize about their grail machines. They also form closely held opinions, e.g., Omega > Rolex, Chevy > Ford, SIG Sauer > Glock (or perhaps vice versa?). My own descent into the rabbit hole of wristwatches was solely due to a watch thread on the Audizine forum. I was astonished by the number of car guys who also collected watches. Their close-up wrist shots were quite enticing and I was particularly smitten by a striking photo of a Steinhart Ocean Vintage Military. I had to have one. And just like potato chips, one is not enough.

Further evidence that watch guys are often gun guys is found on ar15.com. That site has a very active watch subforum and their equipment exchange has a separate section for private party watch selling. Some interesting watches currently up for grabs include a Marathon JSAR, Spinnaker Croft, Alpina Seastrong, Rolex GMT-Master II, Bulova Oceanographer and many others (I doubt that Watch Recon is capturing these so maybe there are some deals to be had!).

In general, Instagram and Facebook don’t seem to have much of a problem with firearms. As mentioned above, EDC postings with handguns are not uncommon. On the other hand, certain watch forums put guns (and knives) on the same level as political discussion and general rudeness. Postings are tolerated to a point but photos of guns and knives are banned outright.

My unscientific observation is that tolerance for gun chatter on a watch forum is somewhat related to the culture of a forum member’s jurisdiction. In other words, where private ownership of firearms is more restrictive, attitudes toward the comingling of watches and guns are less favorable and, in some cases, downright hostile.

Two Broke Watch Snobs has a very active and vibrant Facebook presence driven by several thousand enthusiastic followers. The TBWS policy on guns is summed up by Moderator Skip Rose: “….because watches are widely popular in the EDC community where knives and guns are commonly depicted, pics with guns will be currently allowed so long as a watch is also shown.” In essence, there must be some relevance to wristwatches to avoid the moderator’s gavel. With respect to watch companies, guns are generally not part of the marketing plan although a small number integrate them into their social media on occasion. Brands such as Traser, Lum-Tec and Marathon are popular with military and law enforcement professionals and firearms are sometimes a natural component of their EDC aesthetic.

Before watches, I collected Makarov pistols. Nikolay Fyodorovich Makarov was a Soviet engineer and firearm designer. The pistol he designed was adopted by the Soviet military and police forces in 1951 and was only recently replaced by a more modern design. They are not pretty to look at and, when disassembled, tool marks and other signs of crude finishing are revealed. On the other hand, they are robust, easy to service and demonstrably reliable.

I built up quite a collection as they were produced in Russia, East Germany, Bulgaria, China and post-unification Germany. They were available in various finishes including blued steel, nickel, chrome, satin stainless and two-tone. When you factor in production codes, import stamps and Cyrillic versus English script, there is a vast hunting ground for the serious collector. At some point, my collection was eclipsed by shiny objects. I began to sell those Makarovs one by one and repurpose the proceeds for, you guessed it, watches. My wife marveled at how I seemingly toggled a switch to move from guns to wristwatches. At first, I began to collect Seiko SKX variants, then Russian and German watches. More recently, I sold off much of my collection so I could focus on just wearing my watches instead of admiring them collectively in a box. I’m not even sure if I’m a collector anymore.

There is a large subset of the watch world that appreciates all sorts of mechanical devices. It’s not hard to find a watch enthusiast who also dabbles in fountain pens, folding knives, flashlights, cameras, cars or firearms. While watches and guns don’t exactly go together like peanut butter and chocolate, there are tangible similarities in their respective enthusiast communities. I find both groups to be highly opinionated and passionate.

On a more hand’s on level, watches and guns are the product of inventive minds that long ago figured out how to make these things work effectively. In spite of that, new ideas, technologies and materials are continuously employed to improve functionality, durability and accuracy. It’s a never-ending quest for perfection that is worthy of effort but will never be achieved. That’s one of the things that make these pastimes so similar and so enjoyable. 9 thoughts on “Watches and Guns: Sometimes One Hobby Isn’t Enough”