The Seiko 7A28-7010: A Case for Collecting Vintage Quartz Watches

Outside of the astronomically-priced original Seiko Astrons, Beta 21s, and other very early and collectible examples, the vintage market for quartz watches has remained relatively untouched by the recent wave of interest from watch collectors. While the argument for quartz vs mechanical watches will undoubtedly continue ad infinitum, I hope to make the case that there are vintage quartz watches that are worth collecting, even if they aren’t quite as rare. And to kick things off, I will start with perhaps a particularly eyecatching model: the Seiko 7A28-7010. 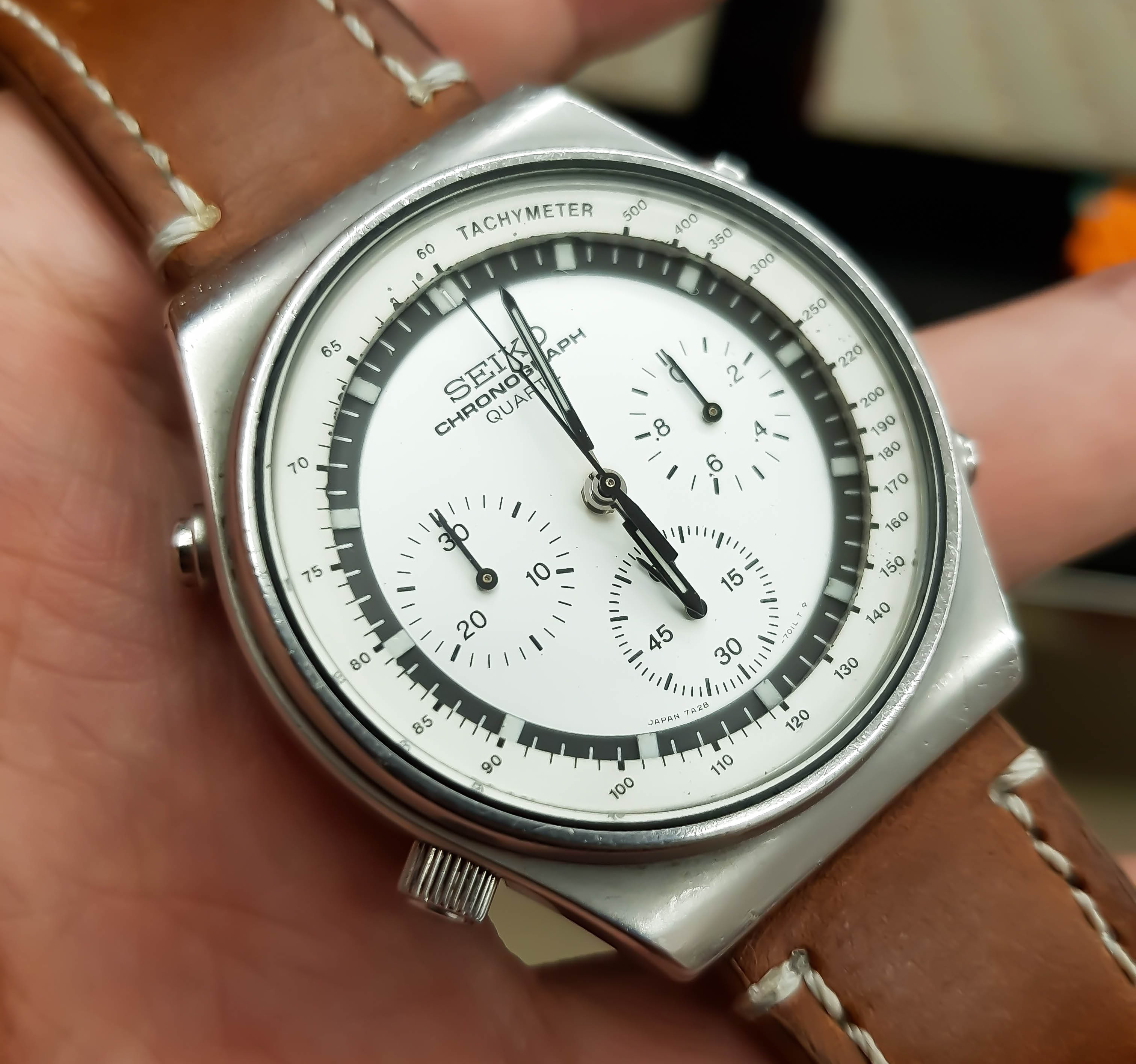 The quartz movement has, in its brief history, been through quite a roller coaster ride. It began at the absolute forefront of timekeeping technology with a level of precision previously unheard of in any portable timekeeper. From there as the technology trickled down towards the more affordable segments of the market, it proliferated into more and more watches. Soon the technology became so ubiquitous that quartz watches simply became the norm.

It was from this era, the heyday of quartz timekeeping, that the Seiko caliber 7A28 was born. Released in 1980 in a market flooded with LCD watches, it was nothing short of a technological marvel. If one were ever to peer behind the solid caseback, a look at the movement would suggest to even the casual observer that there was more to this vintage quartz movement than meets the eye. The Seiko 7A28-7010 is, on the surface, a simple triple register chronograph in a stainless steel case with a bracelet. It featured distinct hooded lugs and the signature button layout of the Seiko 7Axx series chronographs: chronograph start and stop at 2, reset at 4, crown at 8 and another one at 10, which we’ll discuss at length later in the article.

Available in both a white and black dial, both versions have the same core design. The main hour and minute pencil hands are in their customary positions in the center, where you will also find the arrow shaped central chronograph seconds hand. Then there is the 1/20th of a second register at 3 o’clock (sometimes confusingly labelled as 1/10 second in other models); the running seconds is a subdial at 6 o’clock; and a 30 minute counter at 9 o’clock. Each of the subdials is adorned with a simple baton hand. The Seiko’s dial itself consists of 3 distinct levels, with the uppermost level displaying (1) the internal tachymeter ring with graduations from 500-60 units per hour, (2) a chapter ring with applied and lumed hour markers (including a double marker at 12), (3) and printed minute markers comes just below it (before descending into the dial proper). The dial itself has the words SEIKO CHRONOGRAPH QUARTZ printed in 3 lines filling up the negative space at 12 o’clock with the subdials filling up their respective spaces at 3, 6 and 9 o’clock. Taken as a whole, the Seiko 7A27-7010 has a very pleasing symmetry to it. The hooded lugs, simple dial layout, and balanced pushers/crown on either side of the case make for a very clean and elegant design while retaining an element of sportiness. When paired with the bracelet (which I unfortunately do not possess) it has a seamless and integrated look that was very much the aesthetic of the 80s. One begins to see why this watch was nicknamed the “Seiko Speedmaster” given the similarly symmetrical designs on both. It was a nickname that persisted thanks to the bracelet clasp, which had the word “Speedmaster” stamped on it! The Seiko 7A28 was the world’s first analog quartz chronograph movement. It was a triple register chronograph capable of measuring down to 1/20th of a second with a rather unique single-handed split seconds mechanism. Boasting a full metal construction, the 7A28 instantly sets itself apart from most modern quartz movements.

The watch features fully metal gears, 15 jewels, and 4 stepper motors hidden behind rectangular plates. There is even a trimmer for the quartz regulator to adjust the rate of the watch as the quartz crystal ages. As mentioned earlier, the 7A28 functions much as you would expect any chronograph to. Hitting the pusher at 2 starts the chronograph. The 1/20th second hand whizzes about its subdial) while the central seconds hand marks out each passing second. Hitting it again stops it, and hitting the reset pusher at 4 will sweep the hands back to their original positions (unlike a mechanical or mecaquartz chronograph, which snaps to attention). Being a quartz chronograph, it has the unfortunate tendency for its hands to occasionally be out of alignment. While realigning the hands on a mechanical chronograph involves disassembling to get to the heart shaped cams, Seiko kept things simple for the 7A28. Simply pull out the crown to the first position and push the relevant chronograph button (pusher at 2 for central seconds, 4 for the 1/20th counter, and 10 for the 30 minute counter). Each press of the pusher will advance its respective hand by one position. A simple and elegant solution. This leaves us with the elephant in the room: the split seconds mechanism, which I mentioned earlier. Its function here is very similar to its mechanical brethren: with the chronograph running, press the pusher at 10 and the hands will pause, allowing you to record the elapsed time. Even with the hands paused, however, the chronograph continues to run. Push it a second time and the hands will jump forwards to catch up; essentially the function of a split seconds, sans extra seconds hand. Even the minute recorder jumps forward, should you pause it for long enough!

The 7A28 is, to me, one of the finest vintage quartz calibers out there. With functions way ahead of its time and a build focused on long term reliability and serviceability, they just don’t make em like they used to anymore. Case in point: the 7A28 (and its siblings such as the day-date 7A38) was discontinued in 1992 and replaced by the 7T12, a caliber which was significantly cheaper and easier to produce, and is still being used in modern Seikos today.

What are the differences between the 7T12 and the 7A28? For starters, the construction was changed to be mostly plastic and all the bearing jewels were lost. The 1/20th subseconds counter was removed entirely and its function added on to the central chronograph seconds (which now sweeps at 1/5th of a second instead). In its place, there is a 24 hour AM/PM indicator. The split seconds function has also been removed, along with its pusher at 10. And finally, the crown position was moved to the more pedestrian position at 3.

Simply put, the 7T12 is the polar opposite of the 7A28: a basic, disposable, bare-bones quartz movement. If you’re looking for one, there are a shocking number of options available online. There are some legendary pieces with this caliber: think the original Ripley/Bishop from Alien or the one featured on the wrist of James Bond in A View to Kill, the 7A28-7020. The holy grails, however, are the chronographs issued to the RAF and SAAF, the 7A28-7120 and 7040 respectively. All these can command prices up to and even beyond $1000.

If you fear you have been priced out of the market, fret not: Seiko’s propensity for making multiple variants was as true back then as it is now. There are so many options that choosing just one can be difficult! There are two-tone models, plain steel, PVD, even titanium versions were made (the 7080). And these are often available for well under $200, or even less with a little patience and luck! 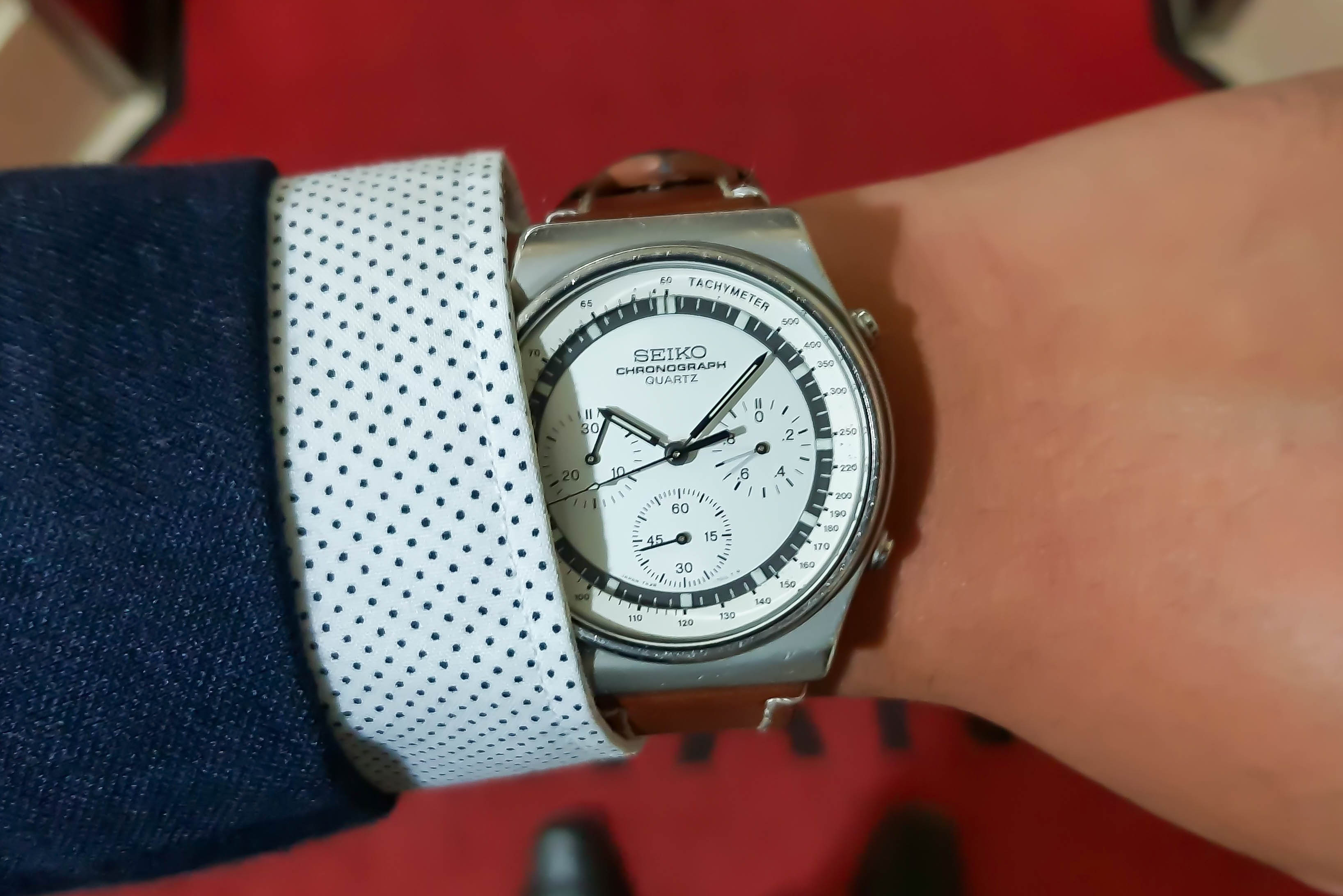 If you were to ask me to choose between mechanical and quartz, my answer is quick and decisive. Cliched as it may be, these old fashioned buckets of nuts and bolts have a certain je ne sais quoi about them. Perhaps it’s the knowledge that the timekeeper on your wrist functions in a very similar way to creations from the 17th century, or perhaps it’s just the idea of your watch relying on your actions and motions rather than on a battery.

Despite that, however, I have found myself falling for this soulless robot, and falling hard. Despite being “just a quartz,” it was made with old school principles and is far from a cheap disposable watch. Historically, it is the first ever analog quartz chronograph, which is nothing to sneeze at. Add in a split seconds function and timing down to 1/20th of a second?


They say actions speak louder than words.. Well, I’m selling my 6139s and keeping this. That should tell you just how much I love this piece.

4 thoughts on “The Seiko 7A28-7010: A Case for Collecting Vintage Quartz Watches”