By any measure, the Kickstarter campaign of the Hamtun H2 titanium dive watch was a wild success. Fully funded in less than 30 seconds, the pledges ultimately exceeded $550,000 with 1,300 enthusiastic backers in the queue. Based on well-documented feedback, that initial euphoria dissolved into a war of words between defenders of the H2’s creator (Ross Davis) and certain backers who were less than satisfied with Ross’ service and communication style. More on that later.

The menu of options that were available was extensive and included six dial colors, date or no date, multiple bezels and case backs as well as the choice of a Swiss movement or a value priced Seiko NH35a. The watch that I chose features a starkly beautiful white dial, ceramic dive bezel and Sellita SW200-1 automatic movement. Overall specifications of this watch are impressive and include a titanium case with scratch-resistant coating, applied indices, sapphire crystal with internal anti-reflective coating, BGW9 Super-LumiNova, 60-click ball-bearing ceramic bezel, drilled lugs, 200m water resistance, screw-down crown, scratch-resistant titanium bracelet with solid end-links. As an early adopter, my cost was $432. which I viewed as an unbeatable value. Comparisons to Ross’ first dive watch, the H1, are inevitable and will appear throughout this review. Let’s see if the H2 lives up to the spec sheet. I have to start with the dial because it’s a showstopper featuring creamy white, applied markers against a pure white background. The markers are very well defined with a silver-grey outline that can appearblack before it catches light reflections. The sword hands are just the right size and have a bold, black outline that allows for quick and easy time reading. The second hand is tipped with an aqua blue lollipop that matches the word “Kraken” on the dial. The date window aligns at 4 o’clock with the crown and its white background nicely integrates with the dial. 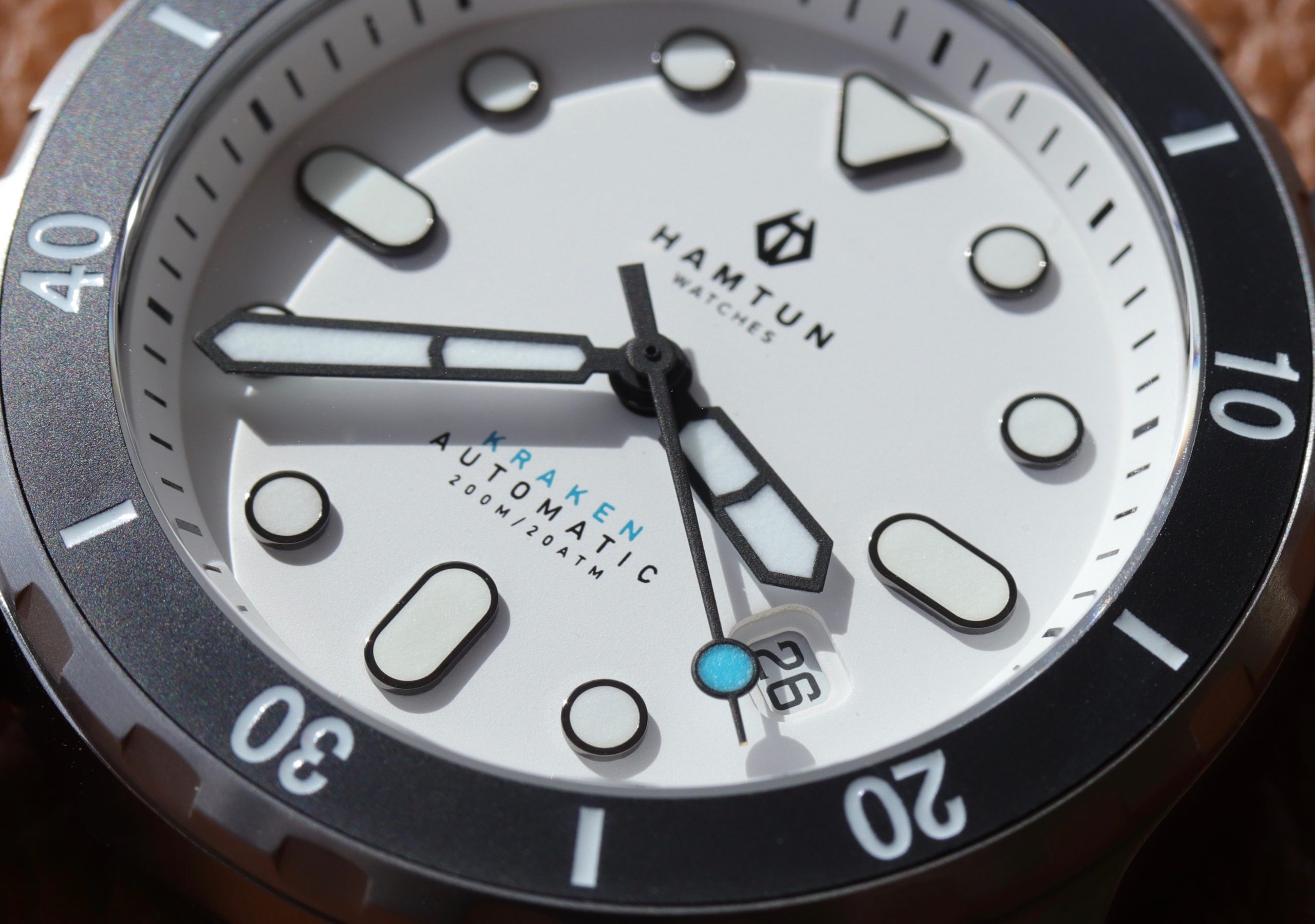 The 41mm titanium case is similar to the H1 but slightly less generic looking and slightly more refined. The surface angles are less abrupt and curvier. The finishing is brushed and has a pleasant sheen. It’s just a better and more integrated package. The screw on case back is dominated by a scowling Kraken that is less scary and more cartoonish than the legendary, supersized Octopus. Right below its front tentacles is a special code that indicates the model, type of movement (“S” for Sellita, “N” for NH35a) and serial number. An exhibition case back is available but you are responsible for its installation. One of the features of the H2 is its anti-scratch coating. Titanium can be prone to scratching and I’m happy to report that, after several weeks of continuous wrist time, the entire case is scratch-free. I certainly haven’t babied this watch and time will tell if the coating continues to perform. Attention lume nerds! One of the criticisms of the H1 was the skimpy lume and Ross has put that problem to rest. The lume application on the H2 is very generous and completely satisfying. Sitting on a dresser across the room, this watch will glow all through the night and into the morning. When judged by aesthetics, the bezel and crown are an improvement over the Hamtun H1. They have a more tasteful appearance with recessed knurling on the bezel and the Hamtun logo nicely machined into the crown. Unfortunately, the user interface on the crown is unrefined and gritty. The action is anything but smooth and there is tremendous resistance when trying to engage the threads. Maybe it will improve with continued use or maybe it will just give me arthritis. On the plus side, the crown guards seem less intrusive than on the H1 and allow for better purchase when muscling the crown into place. The ball-bearing bezel is a nice feature and it does offer precise placement of the indicator with the markings on the chapter ring. It tends to bind when turned slowly but, after several weeks of use, I noticed that the action loosened up and smoothed out. As previously mentioned, I went with the Swiss Sellita SW200-1 movement over the Seiko NH35a. The Sellita movement added $100 to the final cost but offers better accuracy specs and also allows for a case that is 0.5mm thinner. Several informal timing runs using the WatchTracker app point to excellent timekeeping in the range of +1 to +5 seconds per day. The SW200-1 also features a 38 hour power reserve and a quickset date that changes precisely at midnight. The bracelet is all titanium and, therefore, super lightweight. Sizing it was a breeze using a 1mm screwdriver to remove links and then fine tuning the micro adjustments on the clasp. Ah, the clasp. It’s not great.It rattles every which way and required field surgery (using cushioned pliers) to get the safety catch to stay put. Compared to the silicone strap that came with the H1, the rubber strap that arrived with the H2 is a step forward visually but is not at all comfortable. Aesthetically, it looks better because of the nice taper as well as the natural rubber that, unlike silicone, does not attract lint remnants. Practically speaking, it doesn’t work for me. The rubber is not pliable and consequently does not conform to the shape of my wrist. It also has the exact same awkward clasp as the bracelet. However, all is not lost. I have a brand new 22mm Toxic Shiznit that’s been neglected in my strap box for years. I normally don’t wear NATO straps but it’s perfect for the H2. For additional comfort, I cut off the strap keepers on all of my NATO straps as they just add extra bulk with no discernible benefit. After the success of the Hamtun H1, Ross established a reliable fan base hungry for his next dive watch. As the H2 campaign unfolded, emotions ran high for some backers who became disenchanted by months of delays, unanswered questions and shipping gaffes (which they blamed on Ross). Still, many others rushed to Ross’ defense and reminded disgruntled patrons that Kickstarter is not the same as just ordering a product that arrives in two days. My own observation is that Ross became a victim of his own success and was almost vanquished by the sheer number of watches that he had to deliver. The H2’s Kickstarter campaign has run its course and the watch is sold out online. Ross is promising a second batch of H2 models in the future. Other dial options include black, yellow, light blue, dark blue and meteorite. Personally, I found all of those to be rather bland and uninteresting. The white dial is just more playful, more unique and so well executed. The H2 is one of those dive watches that would satisfy Goldilocks. The case size is just right, the lug-to-lug distance is a manageable 48mm and, at 13mm, it’s not too thick. The titanium case is comfortable on the wrist and appears durable, but it’s the dial execution that brings joy. If that was Ross’ mission, then I say mission accomplished.