We talk about “grab-and-go” quartz timepieces a lot on the Two Broke Watch Snobs podcast. The idea was inspired by the realization that at one time or another most of us have been faced with decision paralysis when staring down at our watch box – “I know I want to wear something, but I don’t know what… I could wear that, but I’d have to wind it. I could wear that, but it’s not the best choice for the office/family reunion/whatever the hell event I’m getting ready for…” This is the grab-and-go quartz timepiece’s time to shine – it’s a quartz watch you can just grab, put on, and be happy with. Everyone needs a grab-and-go quartz. The only thing is that until recently I realized most of the pieces I consider as grab-and-go quartz candidates are usually analog. I never really thought about a quartz digital piece fitting the bill. But then fate intervened.

I found myself in the presence of this Casio Wave Ceptor WV-59DJ-1AJF. Why didn’t I ever consider a digital quartz as a grab-and-go quartz? It’s essentially the whole package:

But as I spent time with the Casio Wave Ceptor, I began to realize why I never really considered it to be appropriate as a grab-and-go quartz watch. There are certain nuances of this watch that made me realize that it really isn’t the best watch for everyone. So if you’re thinking about picking up the WV-59DJ-1AJF – this Casio Wave Ceptor review is for you, because there are some things you may not be taking into account, which you need to hear about before making the purchase Measuring in at 39mm in diameter (including the buttons), 48mm lug to lug, and 12.75 mm thick (including the crystal), the Casio Wave Ceptor’s dimensions are a bit odd on paper. But generally with square shaped watches the rules of traditional wearability go out the window. My wrist size is under 7 inches and when I put on the Casio Wave Ceptor WV-59DJ-1AJF, everything just feels right. The combination of a smaller case diameter with a more modern (i.e. longer) lug to lug measurement makes the watch feel retro-fashionable and also very accommodating on the wrist. If the diameter were larger, it would certainly feel bulky since the case thickness is really right on the edge. 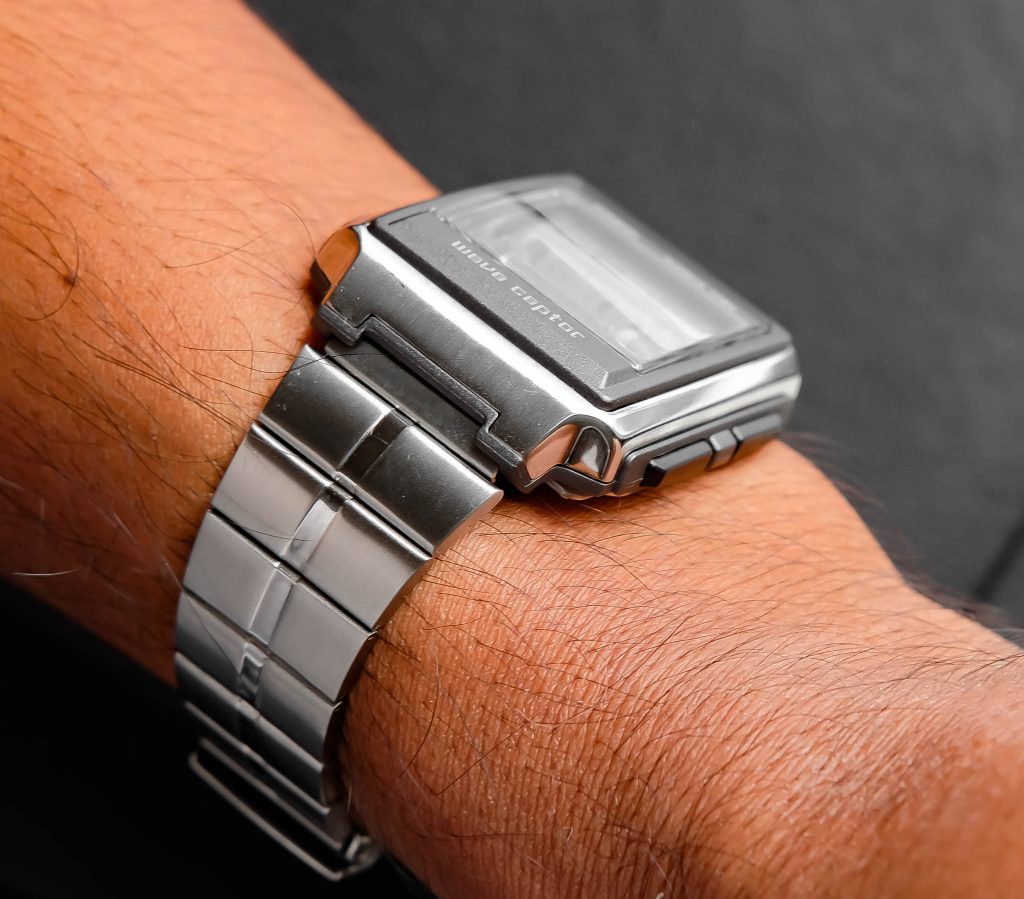 The Casio Wave Ceptor’s case is a mixture of plastic and thin metal. Generally I like mixed material construction, but it’s possible that to some wearers the overall feeling of the watch may feel “flimsy” or “cheap.” There’s no substantial weight of heft to the piece, so if you’re used to the weight of mechanical watches (or just dive/sport watches in general), the lightness may be odd at first. The lug profile is interesting as its one of the more unique aspects of the case. The lug system where the bracelet meets the case is integrated. So the case won’t accept any other straps except the bracelet the watch came with. The lug tips slope downwards but don’t extend beyond the case back. The sloping metal on the lugs created by this angle is very aesthetically pleasing as it’s probably one of the more visually uninterrupted textures on the case. The case back is held in place by 4 corner screws. Here is where you’ll also find the Casio Wave Ceptor features listed as well as directions for the functions of the buttons. 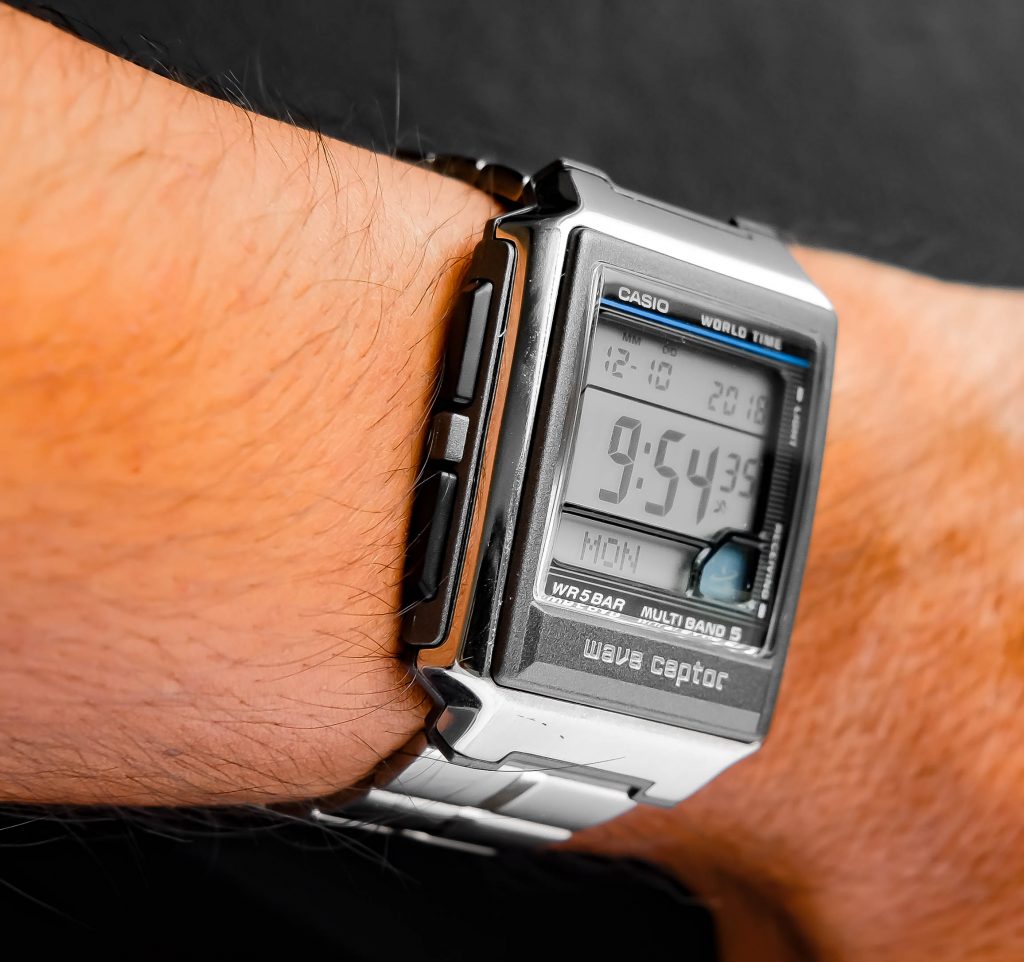 The Dial and Movement

The nature of the dial depends on which function of the Casio 3054 movement you’re using. That’s why I’ve combined the Dial and Movement sections. Independent of the movement functions, the Casio Wave Ceptor’s dial is made up of an external perimeter and an interior LCD readout. The external perimeter is black and features the labels for the buttons as well as the classic Casio feature-text branding. The crystal is a type of molded resin, so it’s going to have a plastic feeling to it. But it’s cylindrical and not flat, which adds dimension to the piece.

From the current-time screen (the most utilized function of the Casio 3054 movement) there are 4 main sections of the dial with which you need to be acquainted. The top section is the date and year. The middle section is the actual running time. The bottom left area is the Day readout, and the small blue area is the signal strength indicator for the atomic time signal.

Beyond the current-time screen it can be a little intimidating trying to navigate all the features and functions Casio packs into their various offerings. Some are more difficult to use than others, but I can assure you that this Casio Wave Ceptor WV-59DJ-1AJF is simple once you get the lay of the land. The corner stone of understanding the movement functions is understanding the button controls on the case sides (Just a heads up – I’m only covering some of the features of the Casio Wave Ceptor movement below – for a full readout of everything this little powerhouse can do check out the features list on Casio’s site.). The Wave Ceptor WV-59DJ-1AJF bracelet carries a lot of the retro vibe on its shoulders as well. It’s one of those special situations where the watch and bracelet really work in synergy to accomplish a specific visual look. Having said that, if you’re into a lot of varied strap combos and switching up your strap game, the Casio WV-59DJ-1AJF may not be for you. The case construction only allows the stock bracelet to fit on the case – there really isn’t enough clearance to fit any other type of strap, however I feel like the Casio Wave Ceptor WV-59DJ-1AJF case only belongs on its stock bracelet.

The actual lug width at the case’s spring bar is approximately 20mm, but where the bracelet actually starts is around 22.5mm. It tapers from there to approximately 18mm at the clasp. The style of bracelet utilizes endearing aesthetics from classic retro digital Casio’s. The entire bracelet is matte finished except for a center line of high polished metal extending from the lugs to the beginning of the bracelet. The line is also indented a bit, which adds very much needed contrast. There’s two elephants in the room though when it comes to these older style digital Casio straps. The first is how the strap feels. The bracelet gets the majority of its construction from thin folded metal, which gives it a hollow-like feeling. This is in opposition to the more modern and familiar method of milling or solid piece fabrication which obviously gives the bracelet a more filled-out and substantial feeling.

I can completely understand if this would deter some folks from buying the Casio WV-59DJ-1AJF. However I enjoy the effect. It would be weirdly incongruous if the watch case was light and the bracelet was solid metal and crazy heavy. Also the hollow-nature of the bracelet really emphasis the retro feel of the watch. There’s a sense of non-fussiness with this Casio Wave Ceptor and I attribute the feeling to the bracelet construction – you’re encouraged to just throw it on and go, which is exactly what I do with the Casio Wave Ceptor WV-59DJ-1AJF.

Oh, that other elephant in the room? Sizing the Wave Ceptor bracelet can admittedly be a bit tricky. The links are held together by a dual interlocking and manual pin setting system. Basically the links are able to snap into each other and are then held in place by an additional piece of metal. Here are the steps: I think for me the biggest hurdle with sizing the Casio WV-59DJ-1AJF bracelet was getting over the sensation that I was breaking the watch. Also, what I appreciate is that technically you don’t need a strap tool to size the bracelet. The slots where you remove the pins are wide enough for anything decently study and metal to fit in an pop the pin out.

The biggest complain that I’ve heard about the Casio Wave Ceptor WV-59DJ-1AJF (and other retro Casio watches) is that it feels flimsy and/or “cheap.” But that’s something we need to dig further into – what does that even mean? A similarly priced $60 three-hand mechanical timepiece doesn’t hold a candle to what this Casio Wave Ceptor offers. Hell, there are watches out there worth thousands and thousands of dollars more and none of them offer anything remotely close to what this watch features.

The big point to understand here is that this isn’t a luxury watch. This Casio Wave Ceptor is something that was designed to feature as many functional features as possible within an affordable price tag. There’s a trade off that brands have to make at certain price points and with this Casio the choice was made to focus less on the marketability of the materials used and focus more on how this could help people in their day to day lives. Although the watch isn’t for everyone, it’s an incredible option for a retro-inspired grab and go quartz timepiece and I’m happy to include it among my very selective collection of watches.

Let me know if you have any questions about the watch in the comments below!