Casio Oceanus Review: The Ups and Downs of the T200

The Casio Ocean T200 can be, perhaps reductively, classified as a “hybrid” watch, but that doesn’t actually seem to appropriately articulate what this watch has going for it. When I think of “hybrid” watches, I think of features such as step counting, device alerts, and other app-integrated controls. That’s not what we’re talking about here. The Bluetooth connectivity of the T200 serves to only synchronize the time and track the power reserve/charge of the battery. However, it is the focus on the time-keeping functionality of the Bluetooth features that make this watch less of a tech toy masquerading as a watch, and more of a beautifully designed timepiece with a few cool, convenient features.

The design of the T200 dial is a bit of a departure from other Oceanus models as it does not contain complications and features common to the line such as a stopwatch, day of the week, world time, etc. Rather, the T200 focuses more on a clean, captivating dial and marker combination. It does, however, keep some of the more critical features such as Tough Solar MultiBand 6 and an Auto Calendar that effectively makes it a “set-and-forget” experience. 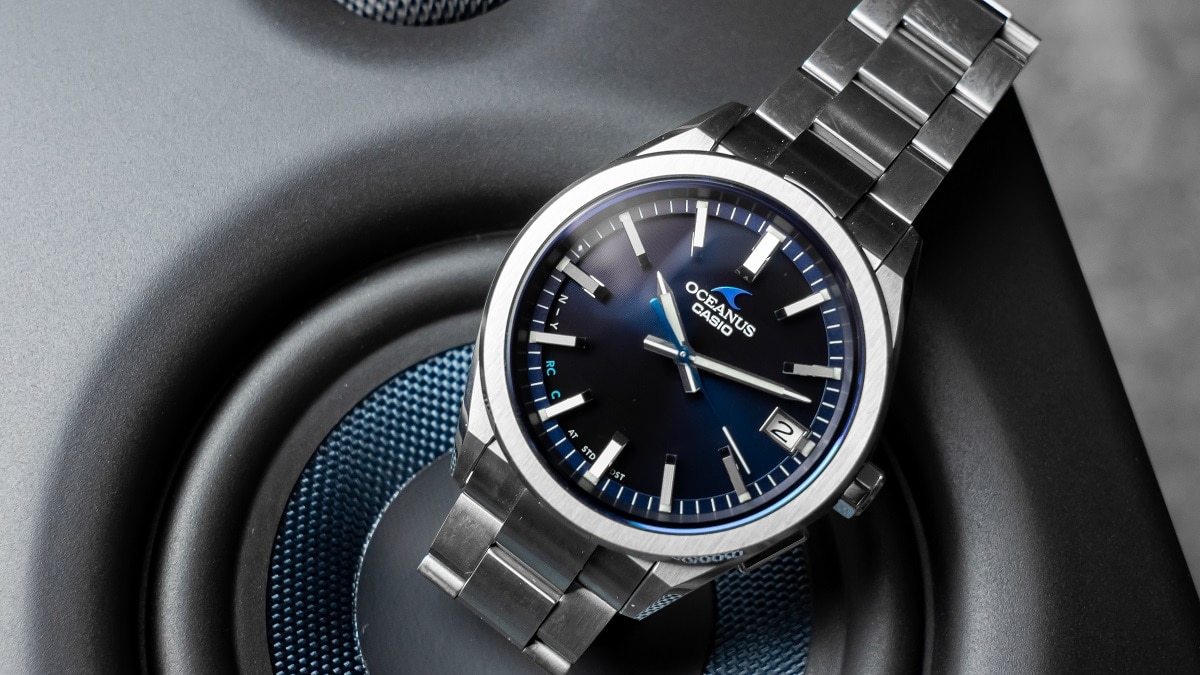 Why the Casio Oceanus?

This was one of those watches that has been a bit of an enigma in my mind since I started the hobby. One of the first cheap watches I bought was the Casio Duro* and I’ve invariably associated the words “Casio” and “watches” with “cheap” and “unrefined.” Don’t get me wrong, I love the Duro, as I still wear it and love it to this very day. But, it lacks any of the finishing, solid construction, and fine details of nearly all watches that surpass it in price.

From time to time I would come across a Casio Oceanus and I would immediately be captivated by the brushed surfaces, bold markers, and clean dials. At the time, I didn’t understand who these watches were supposed to appeal to because I couldn’t fathom any person shelling out $400+ on a Casio watch.

Since then, I’ve obviously learned a great deal about the various Casio lines. And while I’ve never gotten into G-Shocks, I am just about amazed every time I lay hands on an Edifice model. I do believe that if the rational side of my brain had control over my purchasing decisions and not the ceaseless consumerist side, I would own just 2 or 3 Casio Edifice watches and be done with it.

They function wonderfully, they’re incredibly well built with great finishing on the case and the designs are fantastic (for the most part). Well, they do leave a bit to be desired in the way of bracelets as they’re quite “jangly” and lack solid anything. That said, the bracelets are generally quite comfortable and if you can’t stomach them, a Barton Silicone strap is always an Amazon click away.

All this to say, the Oceanus line seems to greatly improve on what Casio already does extremely well as the watches feels premium in a way that’s commensurate with their asking price. While the T200 is not perfect, this watch has many things going for it that make it a bit different than other watches in my collection.

Why I Love The Casio Oceanus T200 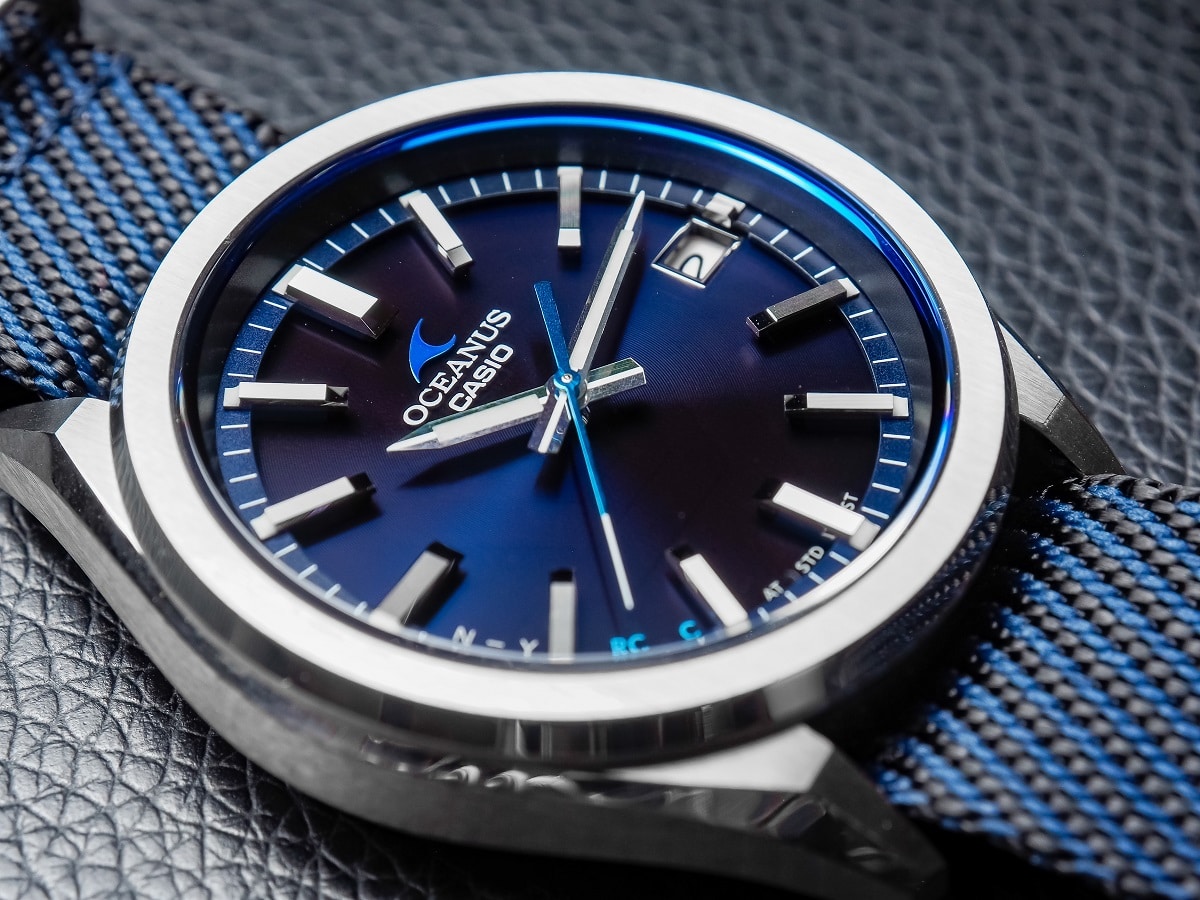 1. The Floating Markers – The markers are actually cut into the chapter ring that sits just atop the dial, allowing there to be a visible separation from the markers and the dial floor. This gives the watch face a dimension unlike one I’ve seen before. The markers themselves have beautiful brushing, a beveled edge on the inner side, and a notch on the outer side. There’s just a lot going on aesthetically without seeming busy. In fact, the dial’s sterility is, and I’ll just say it, pretty sexy. 2. Blue-Tinted Crystal – This is an effect that can go awry if overdone. I had this Relic watch* when I was in high school that was a good example of this effect gone “off the rails”. Obviously, the Rolex Milgauss is an example of this being done incredibly well. I think that T200 nails it. The blue tint, that is mostly only visible on the very edge of the crystal, is set against the very dark blue dial (yes, the dial is actually blue) and presents as if the crystal is glowing in certain lights. It’s an effect that is hard to capture in a photo and is very fetching in person. I am not aware of many other watches that employ this effect with this level of success.

3. Bluetooth Connectivity – Yes, I know this is going to be hard for some people to hear but this is a major convenience that should not be overlooked. When this watch arrived, I was able to connect it to the Casio Oceanus app within seconds. It was nearly a magical moment when the watch’s hands synched with the app and swept to the perfect time, completely in lockstep with the diagram of the watch in the app. That’s just cool – I don’t care how big of a purist you are. 1. Dial Text for Connectivity – While I love the Bluetooth and radio connectivity features themselves, I don’t care for the textual markers for them. While I can appreciate that the features require some sort of indicator as part of the functionality, I still have a hard time seeing these seemingly nonsensical alpha characters on the dial. The good news is that the indicators are less obtrusive than they are on other dials with radio, satellite, or GPS control. They’re nicely tucked in between the markers and aren’t really noticeable at first glance. I have a Citizen Satellite Wave that really calls attention to these in such an obvious way that there’s no missing it.

2. The Bracelet Jangle – You’ll find this criticism of this watch in nearly every review and it’s a weird one because the bracelet is actually pretty nice and well-constructed. For whatever reason, when not on the wrist, it sounds almost as jangly as a bracelet taken from the Edifice line. And whether or not this actually denotes any lack of quality, my brain can’t help but process it that way. The bracelet isn’t perhaps as nice as some of the bracelets that you might get on micro brand watches in the same price range, but it’s significantly better than any bracelet you would get from Seiko at this price point. 3. Pin and Collar Sizing – While this is still related to the bracelet, this had nothing to do with how it feels on the wrist. I flung the first collar that I tried to place into one of the links. Gone. Never to be found again. I had to place an order on Esslinger for all three pipe sizes because I have no freaking clue which size is needed. This madness needs to end. Full stop. The Chance This Stays In The Collection

85% – This watch is unique enough that I don’t know what else could replace it with and, while I hate this term, it has an “x-factor” that I just can’t place. It’s just cool and exciting in a way that only a Japanese watch can be. Also, it’s a JDM product and there’s not a ton of them floating around the states. I suppose for that reason, it will actually hold its value decently well. There is a potential that I won’t wear the watch with a whole lot of regularity, and that could contribute to a future sale because ultimately wrist time is the only metric that matters here. While I’ve only owned this watch for a few week or so, there are no regrets for having finally pulled the trigger on getting one. I bought this one second hand and I’m glad I did. Not only did I get a great price, but I also didn’t have to wait weeks to receive it from Japan or pay weird duties. The watch is a head-turner and seems to work well both on the bracelet and on a NATO strap.

I think this fills an interesting spot in a collection, as it’s not a true dress watch, though it can be dressed up. I could also see this being used as an everyday wear or GADA watch. For me, it fills the oddball or “just for fun” role in my collection. Simply put, it wasn’t filling any void in my collection but that doesn’t invalidate its appeal, beauty, or gratification that comes with finally owning one – available for $450 on Amazon.* 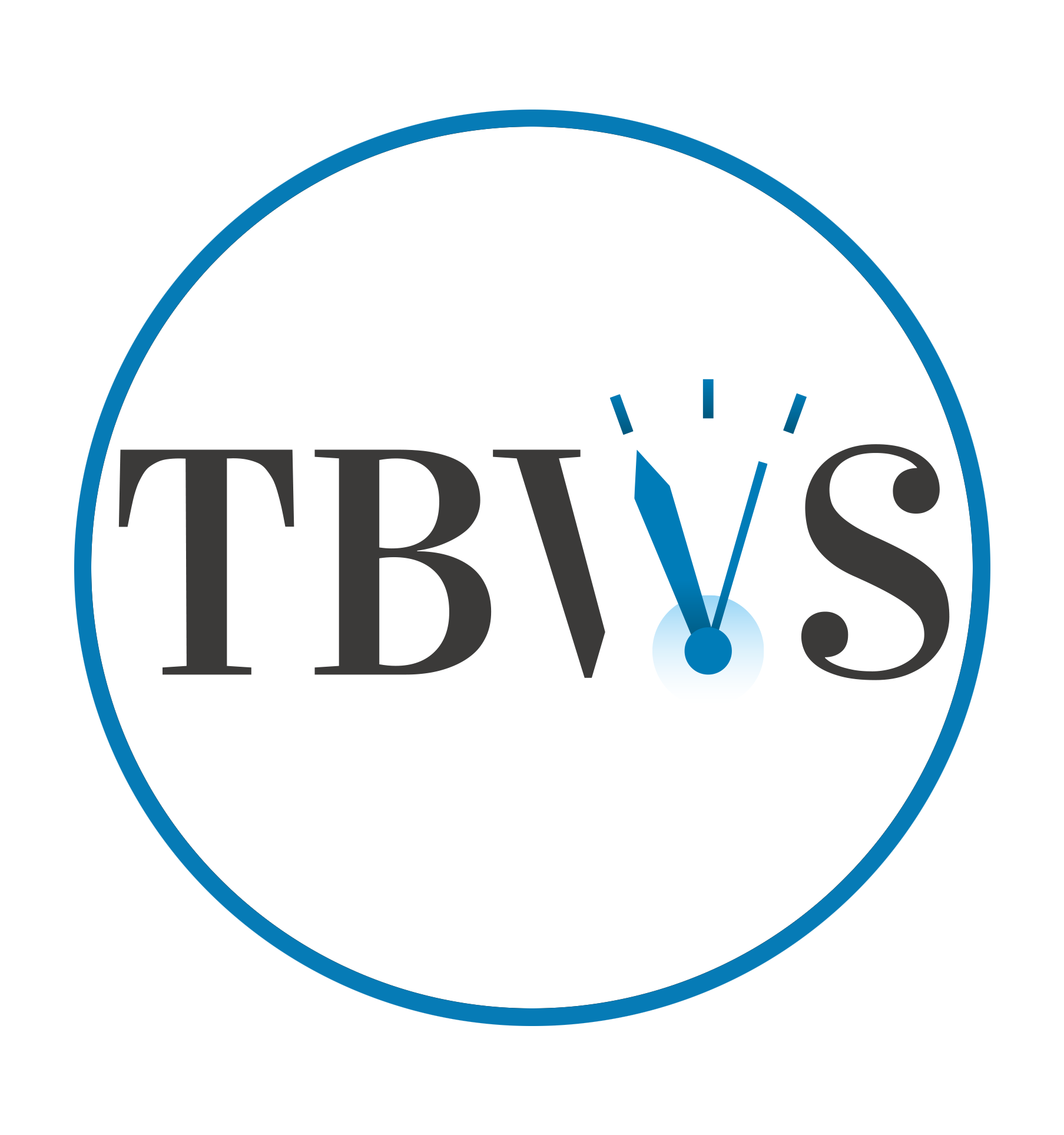 This piece was written and submitted by an incredible member of the Two Broke Watch Snobs fan community! We’re always open to hearing ideas for user submissions – please feel free to contact us if there’s something you want to write about.

6 thoughts on “Casio Oceanus Review: The Ups and Downs of the T200”