In the flieger watch world, AVI-8 has made strides to distance themselves from microbrands whose identity revolve around military heritage homages, instead opting to design affordable tribute pieces with a particular aircraft in mind. They are the West Coast Chopper of the custom aviators, pushing the boundaries of edginess toward design cues almost reminiscent of Diesel Watch Co. They don’t want to be guys who make their own late-comer to the “Dirty Dozen” lineup. Whether it’s because they see it as a cop-out or just plain unoriginal, it’s an approach that appears to bring them continued success. Late last year they released the Hawker Hurricane Bader Chronograph, which was designed in collaboration with the Douglas Bader Foundation. It is a tribute that recognizes both the aircraft and its storied RAF pilot, whose fortitude in the face of hardship leaves me wondering why a watch with his name hadn’t been attempted sooner.

What the Hawker Hurricane lineup lacks in consistency, they make up in sheer variety. It’s fitting then, that the design for this 726-piece limited release is available in three separate, unique color combinations, offering variety across the board in hands, case, dial, and strap. The production amount is the combined totals of 242, the number significant to Bader’s squadron. Each color set is meant to evoke historical significance behind the squadron’s pennant or aerial fighters of years past.  The stainless steel case measures at a hefty 44mm across, and will be made available in bead blasted gray or PVD-coated black. The caseback features a display indicative of Foundation’s partnership and is individually numbered. While military-related commemorative pieces are nothing new (Oris’ Carl Brashear comes to mind), it’s of particular note that nearly every opportunity is made to remark on why this unique design is symbolic, and AVI-8 incorporates that into each design element.  This is not a sheepish attempt to make a pre-existing layout distinct by making a blue dial out of what would be typically black, then referring to it as “le Petit Prince Edition.”

The Hurricane’s crown displays an RAF radial. The second hand’s counter balance is in the shape of the aircraft and the highlighted “22” at the 10-o’clock index represents the number of Bader’s aerial victories. The arrangement of the chronograph layout is inverted as opposed what you’d typically see on a Speedmaster, with a 1/10th second subdial at the twelve, reminiscent of an altimeter on a cockpit dash. It frees up some space for the pilot’s signature at the bottom, a rather “on the nose” touch that I’ve been trained to expect to see on the caseback. Even the straps do their part in keeping with the tribute theme, representing the colors of the aircraft’s fin markings on a single side of the leather strap threads. A NATO alternative is included that has its own unique pennant markings. 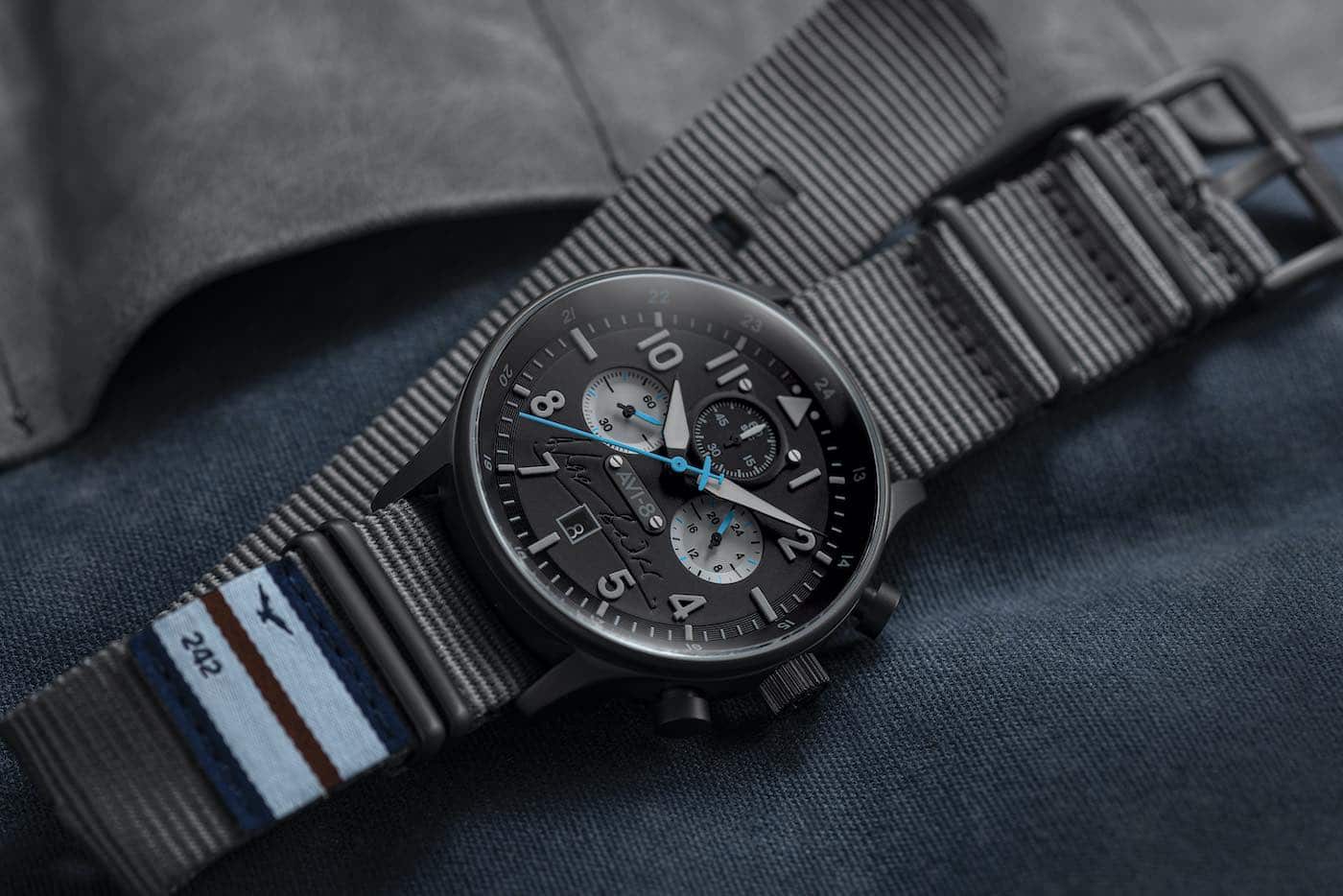 The engine is a quartz-powered chrono made in Japan that features a 24-hour display, date window, and stop watch second subdial.  It is a set up that affords the piece some balance and a welcome departure from the 7750 display that would have made the watch look inescapably similar to an IWC Pilot Chrono, in part to the choice of sword-style hands.  To AVI-8’s credit, this is an effort to be very much its own thing, perhaps influenced by aviator watches of the past, but not without losing sight of the war hero (or his legacy) responsible for the inspiration. The AV-4072 is priced at a very affordable $285, ten percent of which benefits the nonprofit directly, many of whom are disabled vets themselves.

[Editor’s Note: This press piece was slated to be published late last year at the time of this watch’s release. However it was delayed. Our apologies for any inconvenience or confusion this has caused. -Kaz]