11 Ugly Vintage Watches: The 70s Called… and They Want Nothing to Do With Your Watch

It was the 1970’s. Surfing was out, and Soul Train-style was in. Avocado-colored appliances and mood rings were a thing. Two “Wild and Crazy Guys” had invaded your living room through SNL… and then haunted your workplace through terrible impressions from every single coworker. Pintos, muttonchops, waterbeds, and quartz watches had become commonplace. While some changes were primarily cultural, others meant businesses were economically flailing; the Swiss were among them. And it meant that they were willing to try just about anything in order to stay alive. *cough*

Here are eleven watches with designs so bad, we should all be pumped they died with the disco. …and checkered flags because you love auto racing… and calculators (despite availability of digital alternatives)… and diving… when needing to know the time in Baghdad—no wait, Chicago.

All this, in an attractive 48mm package… For when you want that cutting edge look, without all that lame technology.

I made that name up. I wish I could have made this watch up. I wish there was no Corona virus. I wish for a lot of things. Yema probably wishes this was never part of their archives. Good news. If you’ve ever wondered what a watch with five crowns looks like in any major city across the entire world, now you no longer have to thanks to this lovely monstrosity. The future is here. And it’s everything you hoped it wouldn’t be.

This dial is brought to you by the letter “D,” as in “dumb dial design” that’s also a “double retrograde.” This means that the hands flip back up to the top after incrementally inching their way down.

Heck of a conversation piece… The jump hour chronograph that couldn’t.

Just looking at this thing, I can just smell the desperation in the air. Believe it or not, several companies wanted to take credit for this movement, including Kelek and Precimax. In the end, it couldn’t save any of them. 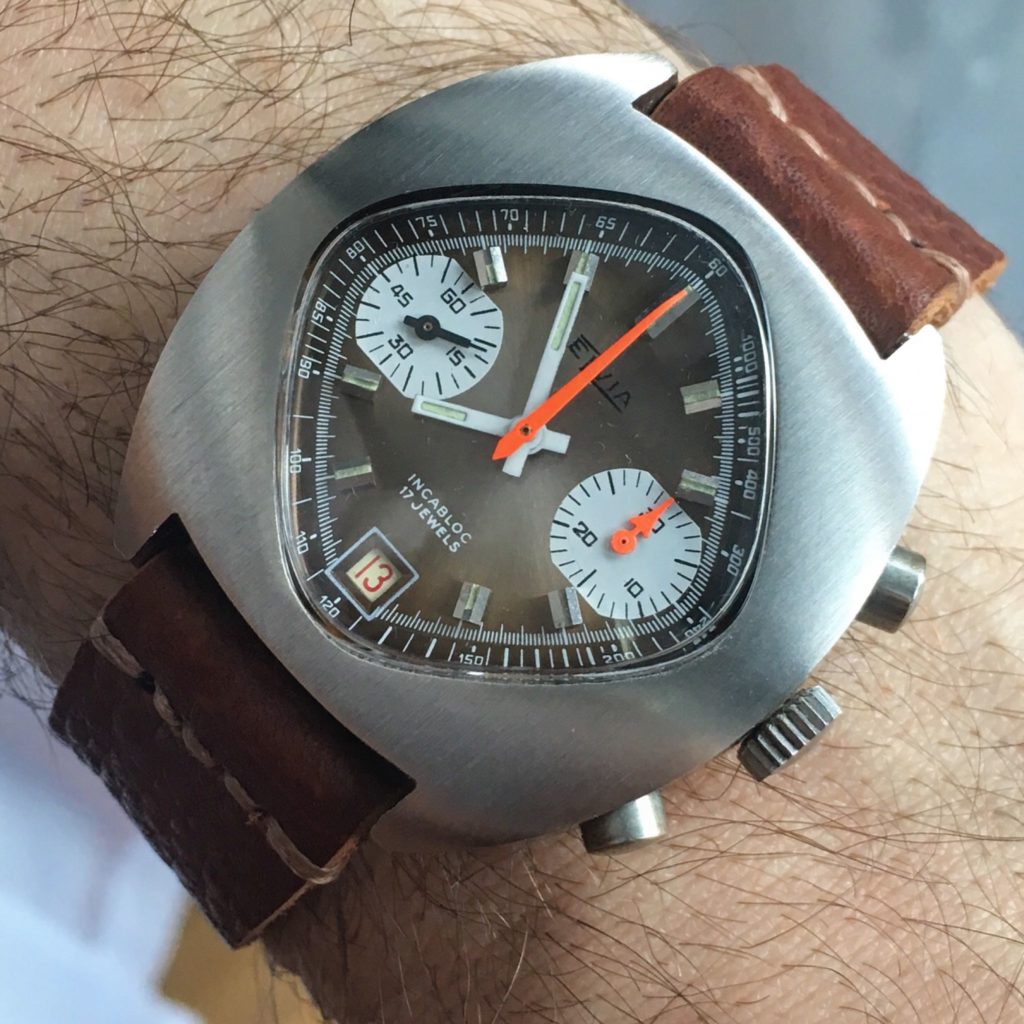 Remember Elvia? No? Oh. Probably cause they made crap like this.

…unless you happen to be a chronograph lover with absolute disdain for circles and squares with practical application. If so, welcome home. Whatever your do, don’t crack the crystal; replacements might be tough to come by.

If for whatever reason you lost your lunch and some splatter landed on the dial, would you honestly know the difference? Honestly.

Believe it or not, Edox kept producing this model over and over. And over. Didn’t you just hate angles back then? Sicura did too… along with any time-telling conventionality that you might have held dear. Jesus Crap… and I thought the name alone was bad enough.

See those creepy-looking sex toy studs around the dial? Those are buttons. You push them with the corresponding numbers or symbols in order to do math. Because the LED screen drained power so fast, this watch came with a really cool travel-size charger… not too large, but approximately the size of a calculator. …it’s difficult to put in words… I’m looking for something that has that used car dealership kinda feel… wait—yes! Perfect!”

This watch didn’t have a name. It’s probably because Sicura had to lay off the majority of their design team because, “who cares, quartz is killing us” was getting muttered in Swiss cubicles everywhere. Otherwise, I’d have to believe someone would have informed the production team it’s wrong to have a purple dial with primary colors as car sale flag accents. Because what’s the opposite of trying too hard? This.

Swiss factory guy on fifth floor roof: “Because fuck you… you and all your quartz-lovin’ buddies giving zero shits about heritage or craft. This is for you, and it’s more than you deserve. I give up. Damn it all to hell.”

Now, inevitably, one of you are going to be like, “Well I actually kind of like the—” and I’m gonna stop you right there. I’m not saying you’re a bad person or that your life is of little value and may God have mercy on your soul. I’m not saying I haven’t shagged up with some dog watches in my time. But at the end of the night, when I went home with that thing on my wrist and my friends whispering, “oh damn,” I was honest with myself about who I was, and what I was doing, and why I was doing it.

Maybe the watch even had a decent movement on the inside. After eating steak everyday maybe I just wanted a hotdog. Regardless, it never changed the nature of the watch or its objective appearance because it simply was what it was: an ugly-ass watch.

12 thoughts on “11 Ugly Vintage Watches: The 70s Called… and They Want Nothing to Do With Your Watch”