Sadly, travel isn’t what is used to be.  Most of us are going to be stuck where we are for a while, but that isn’t going to stop Mido from introducing their newest addition to the Ocean Star family. Up from the depths and just in time for summer is the Mido Ocean Star GMT and while it is primarily based off the current Ocean Star line of watches, it comes with a few tricks up its sleeve to set it apart.

The case design falls in line with the design of the current Ocean Stars but is increased to 44mm from 42 most likely to fit the newly incorporated 24-hour flange between the dial the unidirectional dive bezel.  While somewhat hard to notice at first, the new “flange,” as Mido calls it, its adorned in black and blue to indicated daytime and nighttime hours and gives the dial a certain sport watch “je ne sais quoi.” 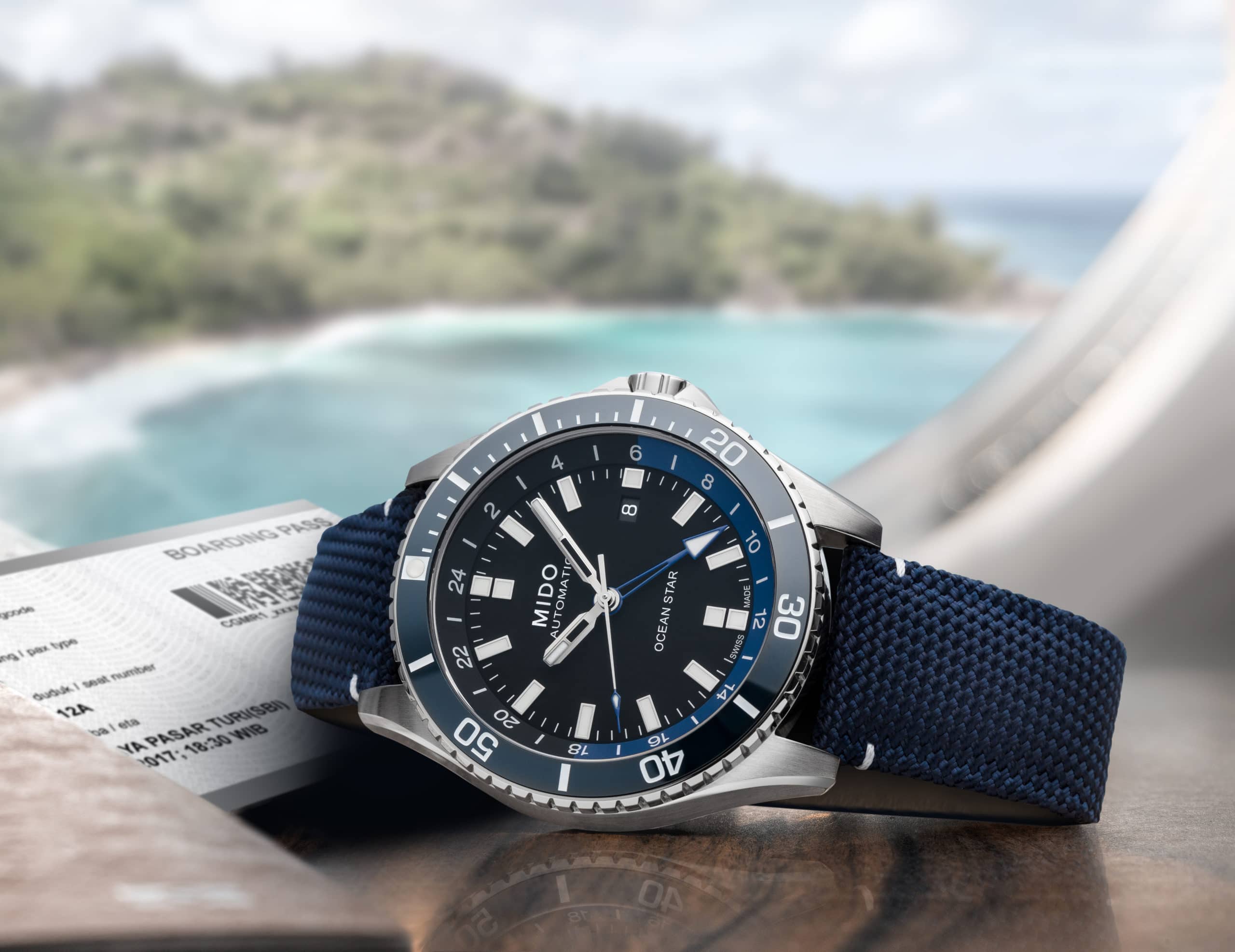 The unidirectional bezel also appears to be somewhat larger than the standard Ocean Star’s and it features a blue ceramic insert which, as we know, is far more impervious to scratches (and shinier). The rest of the details are what you would expect.

The watch offers the same double-sided AR Coated crystal, and 200M water resistance. Mido will also be offering an extremely handsome rolled edge, blue fabric strap at launch with the watch. It looks great in photos, and I wonder if it will be waterproof in any way. I mean, it is a dive watch, right? Personally, in the real world, I think chlorine proof would be more useful. The “velvety” black dial remains mostly a carry over and has white Superluminova on all the applied indices. This version loses the day complication but keeps the date at 3 o’clock on a black date wheel which disappears on the dial leaving only the appearance of a floating number, a visual feature I very much like about the Ocean Stars. Popping against the black dial is the new broad arrow GMT hand in blue varnish which will match the tip of the sweep second hand. Now to the reason we’re all here. The GMT function is an addition to the amazing Mido Caliber 80. It won’t be a new movement. My guess is the movement will be very similar to what you see across the Swatch board and may function very similarly to watches like the Certina DS Action Powermatic 80 GMT. If that’s the case, not only will the watch come with the 80 hours of power reserve, but it will also have the ability to jump the hour hand independently from the rest of the hands! While this sounds trivial, it makes the watch more of an actual traveler’s GMT and not an office GMT. If you can someday travel again, that is. This is just speculation based on similar movements from the Swatch empire as no info on how it works has been yet released. Overall, a very blue and black addition that does a good job at bringing something new to the Ocean Star lineup and while it does (technically) come in “Batman” colors, this is a great design that doesn’t try to copy everything we’ve seen come out lately. While it does have some carryover DNA from other Swatch watches, it’s not overly sporty for the brand and yet it’s just sporty enough for a person who isn’t quite ready to retire to a luxury brand. In my opinion, it stands out against some of the other Swatch GMT offerings as a watch that can be worn by someone just in the watch game or someone who’s tastes are a little more refined.  If blue and black aren’t your thing, two steel bracelet models will also follow, one with orange accents instead of blue on a field of black and gray. And if you’re feeling particularly fashionable or maybe your tastes have moved up-market a wee bit, a two-tone rose gold and steel will also be available. Expect those to come with Mido’s brilliant push button expansion clasp. Mido prices your ticket to adventure at $1190.00. A small price to pay for what you’re getting. Adventure is out there. Albeit virtually for now.